Pinkalicious the Musical is back, and PINKER than ever. 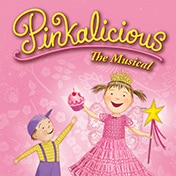 Pinkalicious can’t stop eating pink cupcakes despite warnings from her parents. Her pink indulgence lands her at the doctor’s office with Pinkititis, an affliction that turns her pink from head to toe – a dream come true for this pink loving enthusiast! But when her hue goes too far, only Pinkalicious can figure out how to get out of this predicament.

Vital Theatre Company is dedicated to producing entertaining and educational theatre for young audiences. It commissions and produces three to five musicals for children each season. Since its founding in 1999, Vital Theatre Company has been honored with the Off-Broadway Alliance Award for Best Family Musical, two Awards for Excellence by the Off-Off Broadway Review, and has received high acclaim from audiences and critics alike for being “a wonderful place for parents to introduce their kids to the glories of live theatre, done well and at modest prices” (Off-Off Broadway Review). Vital Theatre Company has presented over 100 original productions for hundreds of thousands of children and their families.

Pinkalicious the Musical Tickets
Running Time: 55 minutes, with no intermission
Tickets start at $49.50.

ALL are welcome! Pinkalicious the Musical
was created with 2- to 7-year-olds in mind.
Everyone must have a ticket regardless of age.