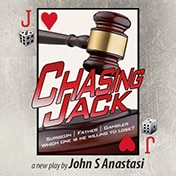 Chasing Jack is a high-stakes, tightrope-walking, roller coaster of a play.

Surgeon/Father/Gambler- Which one is he willing to lose?

Dr. Jack Chase, a suave, world famous-Harvard-educated heart surgeon whose gambling addiction has landed him in a Manhattan courtroom where a young widow says that the addicted heart surgeon caused the death of her husband. Everything Jack holds dear rests on the outcome of the trial. Guaranteed to keep you at the edge of your seat!

(New York City-October 2021)  When John S. Anastasi’s CHASING JACK was invited to join the 131 productions participating in the 2019 New York Summerfest it was honored with both The Best of Festival Award and The Best Play Award.

The play was then added to the 2020 schedule of Florida’s Willow Theatre when it was abruptly shut down, along with every other theatrical production in Boca Raton, on the afternoon of its Opening Night (Thursday, March 12) due to COVID-19.

After making its anticipated Off-Broadway Premiere on Wednesday, September 29, 2021 at the Jerry Orbach Theater in Times Square, CHASING JACK has now moved to The Actors’ Temple Theatre (339 West 47th Street – between 8th and 9th Avenues.)

The first performance at the Actors’ Temple Theatre is Saturday, November 6th at 5:00pm.

Produced by Rachel Stange, directed by Peter J. Loewy and featuring Emanuele Secci as Dr. Jack Chase, the play is not so much a courtroom drama as it is a courtroom bombshell.

Of the 47 shows opening in New York in the next three months?   This is the one to see.  Guaranteed, it will move you to the edge of your seat and leave you there until the curtain.  It’s the story of the suave Dr. Jack Chase.  A world-famous-Harvard-educated heart surgeon whose very serious gambling addiction has landed him in a very serious Manhattan courtroom where the blue-collar family of Michael James claims that he is directly responsible for the death of their Michael. This is Jack Chase’s last-chance malpractice lawsuit.  He needs to win this case. Every segment of his life depends on the win. The audience watches his nail-biting trial in real time. VERY. REAL. HOLD YOUR BREATH.  TIME.  Addiction is ruthless.  But it makes for riveting theatre. And isn’t that why we’ve all come back to the Broadway neighborhood?  RIVITING THEATRE.

“Small-scale and independently produced productions will

be the first to make a healthy comeback to Broadway and Off-Broadway.”

“CHASING JACK is a mesmerizing rollercoaster of events.

It will keep you guessing until the last addicting second.”

“I could sit through CHASING JACK at least one more time and be continuously delighted with the sharp writing, humor, continuous plot twists, and the extraordinary acting of the cast.

It’s rare to see good and evil so well balanced in a show.

You come away asking so many fundamental questions about right and wrong.”

Rachel Stange began her career as a journalist. During that time, she worked with high profile news organizations such as CBS News, Entertainment Tonight, LOGO, CBS Entertainment.  She later made a career change to theater working with the Broadway press firm Boneau Bryan/Brown working on shows such as: Mary Stuart, The Norman Conquests, Brighton Beach Memoirs, The 39 Steps, Signature Theater and more. Her time as a theatrical press agent led her to becoming interested in producing for the stage.Rachel started her producing career in the office of Broadway producer Jamie deRoy and has been with her for over ten years. She was a part of the producing team for The King’s Speech in London’s West End and Godspell on Broadway.  In addition to Chasing Jack, she is the lead producer on a new musical Esther: The Heart of a Queen. She is a member of the Drama League, TRU Career Producers Team and The League of Professional Theater Women.  She also recently joined the film world as a producer on the new documentary Broadway: Beyond the Golden Age now showing on PBS’s Great Performances.

John S. Anastasi works written for the stage include: In My Father’s Eyes, a play with music, produced at the Forum Theater (New Jersey) and the historic Mishler Theater (Altoona, PA.). Music by David Friedman. It was selected as an alternate at the New York Fringe Festival summer 2003. StolenLives, a two-character drama, presented at the Acorn Theater at Theatre Row after being presented at the Mishler Theatre. Pied a Terre enjoyed a successful off-Broadway premier at the Kirk Theater at Theatre Row in 2007.Since being published by Samuel French in 2008, Pied a Terre has been produced at the Cork Theatre in Ireland and has been fully translated to Chinese and produced at the Shanghai Grand Theatre in China as well as multiple cities in China. I Forgive You, Ronald Regan was produced Off-Broadway at the Beckett Theatre in Manhattan in Summer 2013 and published by Dramatic Publishing of Chicago. Transition was presented at the Dorothy Strelsin Theatre and the 5th Wall Theatre/Richmond Triangle Players in Richmond, Virginia.

Peter J. Loewy was the producing Artistic Director of the Forum Theatre Arts Center in New Jersey for 35 years where he produced and directed over 100 plays and musicals.  He recently wrote and directed a parody of House on Haunted Hill, A Horror of Comedy, based on the 1959 film of the same name. He began his career as a young man with famed librettist Michael Stewart and producer David Merrick.

THE PLAYING SCHEDULE
Saturdays at 5:00pm