Actors Temple Theatre and the premiere of a new musical by Robert L. Hecker (HONESTLY ABE).

(CLOSED) FLACK HOUSE, THE MUSICAL played a Limited Engagement  from October 21 through November 16. 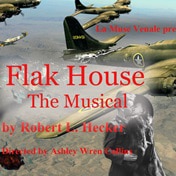